Chu Meng’s story is a bit unusual but her story all the same.

Our family like many families started out as a NSN family. Our LID was May 16, 2006. I started looking at our agency’s waiting child list in November of ’06 but my husband was not ready to take that step. I started doing research and printing off articles on different special needs so I would be prepared for our next talk about adopting a child with special needs. At the end of June 2007 we filled out our medical check list and submitted it to our agency. We had checked off over half of the items on the list and felt comfortable with our decision.

On October 5, 2007 we received our referral call. I was excited and shocked as we had not been on the list for very long. I had our oldest daughter video the call. What I heard though left a knot in my stomach. Our daughter had an Arachnoid Brain Cyst, developmental delay and was at risk for seizures. It was almost too much for me to think about. Where did my excitement go? I was now scared and nervous. She was not walking or talking at almost two. I now had to call my husband and tell him about our potential daughter’s special need that I knew nothing about.

My husband came home from work and reviewed her file with me. Did I mention it was a long holiday weekend? I was able to send her file to our doctors office and speak with him. All the information I found on the internet was extremely frightening. I did find information at Children’s Hospital of Boston. I was even able to speak to one of their pediatric neurosurgeons. After speaking to both doctors and tons of prayers we knew this was our daughter. A week later I was able to talk in person to my neurosurgeon. We showed him the CAT scan China sent us and the pictures of Chu Meng. He told us that yes, the CT looked like an arachnoid brain cyst. He also look to see how her pictures were. He did mention some thing about a stroke but said she looked great. We knew we would have to have faith and courage to get through the coming year of possible brain surgery or a brain shunt. 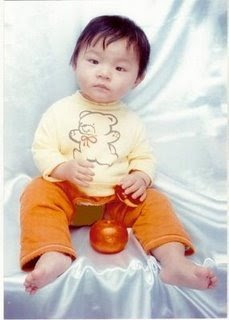 Two weeks before we met Chu Meng we received an update that she was using a baby walker (still not walking independently) or talking. We met Chu Meng on December 10, 2007. We went into that day with no expectations and received so many blessings. We walked into the room and saw our daughter standing! Not only was she standing but she was walking! Talk about breath taking! We were so blessed and truly felt God’s presence that day.

After a month here in the states all the tests started. We were seeing doctors and doing different test twice every other week for a long time. One of the first tests done was an MRI. The results of the MRI shocked us. Chu Meng does have cystic pockets within her brain but she had a stroke in utero that has caused her to have mild cerebral palsy. Can I tell you that we did not check off CP on our long list of medical special needs. I stereo-typed like most do when they hear cerebral palsy, I thought of the worst possible case. I didn’t even research it. That’s OK! If it took an arachnoid brain cyst for us to be aware of cerebral palsy than so be it. Now we educate everyone and anyone about it. 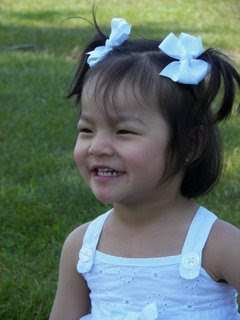 Chu Meng has gone through a ton of tests to make sure her vision and hearing are well. She has had EKG’s and EEG’s. You name it, she’s probably had it. Chu Meng currently takes medication for seizures. She has had two major seizures since coming home. Both were induced by fever but because of her brain damage she will always be at risk for seizures.

We recently found out that Chu Meng’s whole left side of her brain was damaged during her stroke. You might not know it if you were to see her in the store or on the play ground. She walks with a very small limp and fists her right hand. If you speak to her she’ll probably just smile at you. You see Chu Meng’s speech has been affected the most. Even though she understands you her little brain and mouth have a hard time getting the words out. She does use some sign language though which will come in handy for our next adoption. Oh yeah, we are adopting a 6 year old little boy who is deaf! 🙂

We have been blessed beyond our wildest dreams. Has it been hard? Yes! Does it get easier? You betcha!

One response to “Chu Meng”